Do people get married later than normal?

Fair warning: this entry doesn’t contain or use a single line of code. I got curious browsing Gabminders data and saw that they did have historical data for first age of marriage for a bunch of countries. I took the data from England, because they have fairly early records. The chart looks like this: 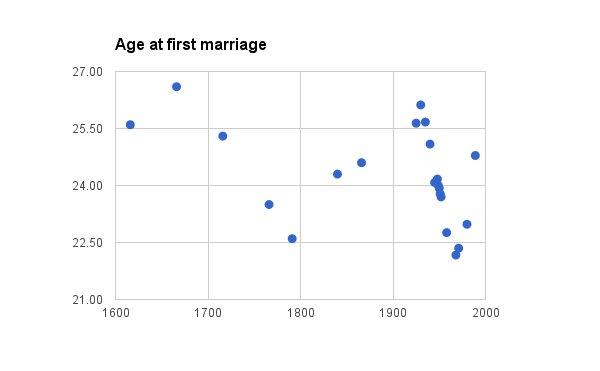 What you are trying to see isn’t there: any kind of trend, other than the average age at first marriage never went below 22 or above 27 (meaning it stayed within +2 years and -3 years from 25) for 400 years. It is worth pointing out that the highest marriage age happened around 1666, which is the time of the Great Plague of London, and the lowest happend roughly after the second world war; in fact if anything it looks like the average age at first marriage is only moving back up from its history low.